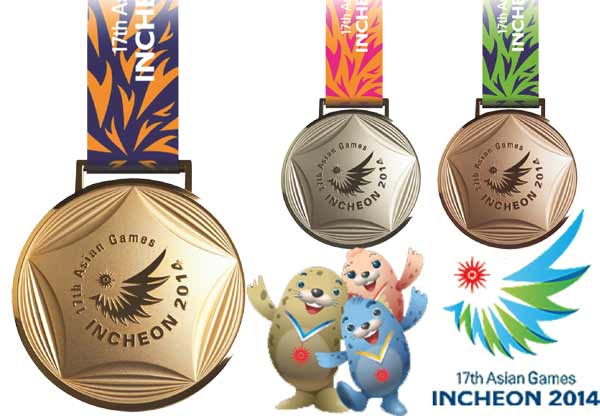 Asian Games 2014 Medal Tally and Complete events results with live updates are here. The Games is hosting in Incheon, South Korea. This is the 17th edition of Asiad and this is the largest sporting event of Asia. Asiad, The Asian Games 2014 is governed by OCA, the Olympic Council of Asia.There are 439 events from 36 sports and disciplines in this edition. Opening ceremony is scheduled on 19th September. All the disciplines will be held after the opening ceremony except football. Football matches are starting on 14th September and the final matches are scheduled to 1st and second October 2014.

Hosting city won the bidding on 17th April 2007. It was by defeating Delhi, India. This is third time that South Korea hosting Asian Games. Incheon defeated Delhi by 19 votes in bidding. They scored 32 votes while Delhi won 13 only. “Diversity Shines Here” is the official slogan of Asiad 2014.

The Asian Games 2014 Medal Tally is written in order of Most Golds, then Silvers and Bronzes. 45 nations were participating at 2014 Asiad. China were the last time champions, In 2010. South Korea were second in 2010 and Japan, Iran and Kazakhstan were the 3rd, fourth and fifth respectively at Asiad 2010 Medal Tally. In 2010, China won 199 Gold medals to become the first in table, while South Korea, the second nation of medal table were only scored 76 gold. Asian Games 2014 Medal tally written here will be up to date and highly referenced with official portal. stay connected with for live actions.

The expense for 2014 Asiad is estimated as approximately 1.62 billion us dollar.

The medal tally 2014 will be updated here just after the first Final event is completed stay tuned with us. 1st medal events is on 20th September after the opening ceremony on 19th. Aquatics, Cycling, Equestrian, Fencing, Judo, Shooting, Weightlifting and Wrestling are the first medal events